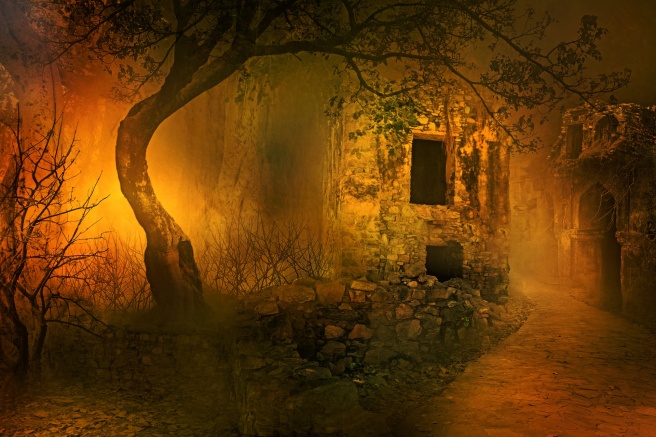 A few weeks ago, I attended Total Con and received a welcome invitation to join in on a Masks of Nyarlathotep campaign scheduled to begin in a few weeks. Unfortunately, the game’s Sunday night meeting schedule conflicts with my own local gaming group and I had to regretfully decline. However, the invitation got my Call of Cthulhu synapses firing again and I’ve been thinking a great deal about what to run in the future. We’re over a year into our ongoing The One Ring campaign, but I’ve already alerted the players that I’ll be calling a brief hiatus once we hit an appropriate milestone in Middle-earth. After that, it’ll be time to switch gears for a bit and something Cthulhu-related is a viable candidate.

This has thinking about how to interpret supernatural events in a Mythos-themed setting. It’s a topic I’ve attacked before with various success. Sometimes I’m turned off by the fact that in Lovecraft’s work, it’s the Mythos at the bottom of everything. From a literary standpoint, this conceit provides a solid foundation and accomplished what H.P. wanted—a different bogeyman than the traditional ghosts, vampires, and werewolves that filled the genre prior to his efforts. But from a gaming standpoint, it can be a little “same same” if the players know there’s a Mythos beastie behind every bit of backwoods folklore.

At the moment though I’m enjoying the mental exercise of trying to twist various Mythos phenomenon and entities into classical monsters—or at least as the seeds that spawn the folklore that hint at traditional monsters and evil things. You can’t get much more classical than a ghost, so I’ve start there. Off-hand, I can’t remember if Lovecraft ever wrote a story that features the restless spirit of a dead person inhabiting a crumbling building (“The Shunned House” is close, but not quite). If he did, the story is hiding in the far stacks of my mental library and I’m sure someone will remind me of it or it’ll come to me at 3 AM some stormy night [Author’s note: Or before I finish writing this essay!]. Until then, however, let’s say Howard never did and instead think about how he could have used a ghost in his stories and still plays by the Mythos rules.

There are undoubtedly numerous other possibilities I’m overlooking, some of which will stem from canonical Lovecraft works (such as “The Mound” now that I think of it) or the mass of extended writings filling out both the Mythos and the Call of Cthulhu RPG. I accept that. I wanted to brainstorm a bit without doing any research or fact-checking from the extended Cthulhu corpus of work, and this list is the result. Not a bad start and there’s a few solid adventure seeds and plot twists lurking in there. All in all, it’s a good beginning to the prolonged process of Mythos investigation planning. More to come.

I’ve never been shy about my pride in the Shudder Mountains campaign setting for DCC RPG. Inspired by the works of Manly Wade Wellman, Appalachian folklore, and my own time in the Catskills, the Shudder Mountains is an unusual fantasy setting, one filled with a depth that far exceeds my own contributions to it. Although I’ve written north of 100k words for the Shudders by now, there’s still more to tell. Hopefully, fan demand will allow me to continue to do so for Dungeon Crawl Classics.

However, since I’d be writing that theoretical material for commercial release, there are certain limits to what I can legally include in the Shudder Mountains. Those restrictions don’t really affect me here since this is a place for me to freely share fan-made content. I intend to take advantage of that freedom and perhaps help others enrich their Shudder Mountain campaigns, while hopefully steering some traffic to the creators whose work I’m translating for DCC.

There have been two graphic novels published in recent years that I feel are blood relatives to the Shudders: Harrow County and Hillbilly. Harrow County is closer to Wellman’s work, in that it takes place in a relatively modern America. Hillbilly, on the other hand, is much like the Shudders as it’s set in a fantasy realm resembling Appalachia. While both are amazing, Hillbilly is the easiest to translate directly from graphic novel form to RPG material.

From time to time, I’ll be stating up some of the characters and monsters from both graphic novels and posting them here as supplemental Shudder Mountain material. In the meantime, I suggest you seek out both the first trade paperbacks of both Hillbilly and Harrow County to give yourself the proper background knowledge of their settings and inhabitants, and to put some well-deserved money in their creators’ pockets.

To kick off things, let’s begin with the hillbilly, himself. Rondel would serve as a great ally for your PCs during their explorations of the Shudder Mountains and likely has goals and intentions in line with the party’s own.

Rondel was born the child of an unwed mother, shunned from the rest of her. He was born without eyes, having only bare flesh where his eye sockets should be, and his mother’s people took this as proof of her sin. For this deformity, they considered the boy cursed. Rondel came of age with only a single playmate, a tomboy named Esther who lived near his mother’s lonely cabin.

In his adolescence, Rondel encountered the witch called Mamie trapped in a snare left by her rival, Eldora. Young Rondel freed her, not knowing at the time she was a witch, and Mamie rewarded the boy with a cleaver stolen from Lucifer’s kitchen in the bowels of Hell. Imbued with dark magic granted by Lucifer’s touch, the cleaver was anathema to witches, deadly to the touch. In addition to the blade, Mamie had one more gift for Rondel: his sight. Using a knife, she cut two slits in the bare flesh covering the boy’s eyes, allowing him to see for the first time.

But every witch’s gift comes with a price, and the first sight Rondel ever saw was his home torched to the ground and his mother missing. Mamie told the boy that Eldora had burned down the cabin and transformed his mother into a hog, who the men of the village then ate. Black tears ran from Rondel’s dark eye slits, forever staining his face.

It was then that the boy realized he’d been played a fool by Mamie and that the witch intended to use him as her instrument in killing her rival. Rondel swore a vow at that moment to kill every witch in the hills—starting with Mamie, herself. The devil’s cleaver took its first victim that day.

And so the story goes that “Rondel took up that cleaver and, having no ties, went up into the hills to wander, vowing to cut down the forces of darkness that preyed on folk, and many a strange adventure he had.”

The Devil’s Cleaver (1d10+1/1d10+2 plus special vs. witches): This magical weapon is a meat cleaver of tremendous size. Only those with a Strength of 14 or more can wield it single-handedly. It is a +1 magical weapon against most foes and possesses a bane against witches. A witch touching the devil’s cleaver must make a DC 13 Fortitude saving throw, taking 1d6 damage on a failed save and half as much on a successful one. When wielded in combat against a witch, the Devil’s Cleaver is a +2 weapon and, in addition to damage from a blow, a witch struck by the blade must make a DC 15 Fortitude save or be automatically slain. While carried, the Devil’s Cleaver provides 25% magic resistance against witchcraft, checking against this percentage to determine if the spell affects the target before making any saving throws as might be applicable.

NOTE: The definition of “witch” and whether an opponent is affected by the cleaver’s bane is left to the judge’s discretion. Any wizard that is the servant of one of The Three would likely be a witch for purposes of the cleaver’s bane power. Other wizards and magic practitioners might also be subject to the bane even if they don’t consider themselves witches. After all, the Devil’s Cleaver gets its dark magic because Lucifer will have n servant rival his power and anyone who trucks with devils and demons might be considered a potential challenger for Hell’s throne.